I'm currently running a game in the Planescape setting, or at least my more early-modern, more chaotic version of it. For this game, I wanted to have a way to generate Sigil's weather. I found a great table: 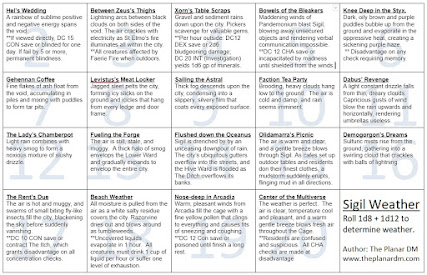 But was disappointed by the small number of entries. So I decided to expand on it, as follows.

1-2 – Orcus’ Chamberpot – The ooze portals of the Hive open in the sky, vomiting thick, oozing mud from above in sheets. Everything is filthy and the stench is unbelievable.

3-4 – Hell’s Wedding – Sublime rainbows of positive and negative energy spark across the Void. Don’t look right at them.

5-6 – The Void Looms – The clouds and fog clear. You can see the entire Cage. Skeins of shimmering portal-clouds show dizzying views down the Spire. People tend to keep their peepers fixed firmly on their boots.

7-8 – Lolth’s Vile Gaze – Portals to the Abyss open in the Void, allowing reeking yellow fog that stinks of rotten meat to descend on the cage – along with Abyssal fauna, who crouch on rooftops and among spires. A few Varrangoin come to the Cage, joining their fellows in Gallenshu Rookery.

9-10 – Illusionist’s Fog – A strange, shimmering mist winds its way around the towers and alleys. It twists odd colours, and tricks the eyes and ears, producing false sounds and sights, while displacing real ones or obscuring them entirely.

11-15 – Frostfell Hail – Heavy white chunks of hail smash down from the sky, stinging the skin. Occasionally, heavier chunks fall with a splash of ice. The temperature is low, but not as low as it could be. Thick, icy clouds form above, freezing anyone that flies through them.

21-22 – Archfey’s Garden – This rain is thick with greenish algae. Moss springs up in places where puddles form, and the scraggy grass and dying trees of the city look a little more lively than usual. A strong stench of petrichor fills the air, and ethereal Feywild flowers bloom in drains.

41-44 – Between Kord’s Thighs – Lightning and booming thunder rock the Cage. Sheets of rain fall with driving force, and howling winds sound like the distant bellows of dead champions.

45-46 – The Sound of Iron Waltzes – Flakes of rust and chips of iron scatter down from the sky, alongside fat droplets of rain and sharp, cold hail. A dull grey haze crosses the city. The smell of blood is carried on the wind, and the distant clanging of iron can be heard. The Temple of Bane begins a festival in praise of war and violence.

47-48 – Avandra’s Picnic – The city is dry, warm, clear and pleasantly breezy. Just as everyone puts on their nice clothes and gets set up outside, the Weather Changes suddenly with a flash of cornflower blue. Re-roll.

49-50 – Imix’s Braziers – The air is dry, and extremely hot. Everything is tense and ready to snap.

51-52 – Bel’s Chimneys – The air is full of a dense, hot, sulphur-stinking smog. Tiny glowing embers float along, liable to start a fire if left unwatched. The weak-lunged remain indoors while fiends roam confidently. Is this a Baatezu weapon, deployed through Sigil’s weather?

53-54 – Dust of Mithardir – Pale sandstorms blanket the city. The whitish sand of Mithardir descends from the sky, and the temperature increases slightly. The winds of the Cage are particularly puckish.

55-56 – Tears of the Fallen – Ethereal fogs come whispering in, making everything Ethereal visible – including the city’s Xill community, who live Ethereally near the Armoury, and the many, many ghosts near the Mortuary, who form a shimmery pillar visible from across the city.

57-58 – Red Rains of Cathrys – Stinking red rain that stings the skin and sickens animals sweeps the cage. The clouds occasionally look like faces, and you could swear you can see creatures, the size of whales, swimming around up there.

59-60 – The Judgement of The Mordai – Howling winds rock the Cage. Flocks of birds of all shapes and sizes crowd the Cage. Cagers are thankful for the free food. No rain falls, however, despite the swirling clouds above. It’s as dry as a bone.

61-62 – Levistus’ Meat Locker – Hideously cold sleet and snow begins to blanket the Cage. This miserably wet slush fills every available area, and the temperature plummets. Small creatures can be seen frozen in the ice. A few survive the journey from wherever the ice originates.

63-64 – Ogremoch’s Dust-bin – A dust-fall begins, hard little pieces of grit skittering down rooftops. Then gravel clacks down like painful hail. Then the boulders start, smashing down from above. Roaring trade in iron umbrellas starts up.

65-66 – Kostchtchie’s Fury – Howling blizzards seize the cage. Thick banks of snow build up in alleys and closes. Thick icicles form on overhangs. The poor folk of the city crowd next to makeshift fires and the Gatehouse is full to bursting.

67-68 – Gehennan Coffee – Thick flakes of ash fall, combining with any moisture into sticky tar. Drier parts of the city are now home to ash-drifts.

69-70 – Zehir’s Howls – The winds of Pandemonium visit the cage! Unprotected objects are blasted away, curtains and drapes are ripped down, the Gatehouse ‘sings’ as the iron spires on its roof resonate madly, and verbal communication outside is impossible.

73-74 – Primus’ Workshop – The air is perfectly still, and humidity is low. The city is at perfect room temperature. The sound of distant ticking pervades the city. Slaad pace uncomfortably, while Rogue Modrons briefly become distracted as the song of the Great Machine sings to their minds.

75-76 – Astral Fog – Shimmering silver fog occupies the city. A thin silvery film forms on everything, and everyone has strange, surreal dreams – DC 15 Wis save, or no rest from a long rest.

81-82 – Bytopian Summer – The weather is hot and muggy, and a fine haze of pollen descends on the city from above, accompanied by fireflies the length of your hand, in the hundreds.

83-84 – Fuelling the Forge – Still and smoggy, with strange haloes of orange light visible through the soup.

85-86 – The War of the Weather-Lords – The endless war of Yan-C-Bin and Chan is one of the oldest in the multiverse. And it seems to have come to the Cage, if only for a while. On the first day, the winds are utterly still. Then – they pick up. Faster and faster, until waist high tornadoes are scourging the streets and air elementals are battling among the towers and rafters. Flying roof tiles, tipped over stalls and generally hazardous conditions do nothing to stop the people of the city from going about their business – and indeed, some even choose a side and take part!

87-88 – Nose-deep In Arcadia – The days are warm, bright, windy, and full of fine yellow pollen. Those with sensitive noses are likely to prefer rain.

89-90 – Sunnis’ Blessing – A dust-fall, but a calmer, quieter one. Eventually, small chunks of gold and gems fall from the sky, sparking fighting in the streets for the larger part of the haul.

91-92 – The Shroud of Karasuthra – Sigil is continually wrapped a cool, quiet night. Sounds are muffled, lights are dimmed, and the shadows of large animals are seen stalking the alleys.

93-94 – Fogs of Belierin – A cool fog crosses the city, and every light develops a rainbow aura as it is reflected and refracted. Small rainbow will-o-wisps float through the Cage at night.

95-96 – Gaze of the Hebdomad – Celestial choirs echo across the city from fluffy white clouds as the temperature rises. Calm, pleasant breezes and the occasional cooling drizzle. Everything is bright, and horrible. Cagers and Fiends alike snort in disgust as Upper Planars sing along enthusiastically to the choirs.

97-98 – Shimmering Radiance – Thick clouds gather over the cage, and, from within, a radiant, honey coloured glow issues forth, tinting the whole city yellow and spraying the area with warm, radiant light. It still isn’t sunlight, apparently, but does make vampires, fensir and drow uncomfortable.

99 - The Heavens Have Opened – The Gates have opened to – The Silver Sea? Holy water pours down on Sigil. Fiendish folks run for cover while Celestials stand and enjoy the cool, sweet, rain. The city looks cleaner than it has in living memory afterwards.

00 – Centre of the Multiverse – The weather is calm, and pleasantly warm. No clouds loom overhead – no rain or portal-weather. Cagers are suspicious and confused.