Meltings of the Slush Glacier

I really like slush piles. I love just violently scribbling ideas until they begin to form a cohesive whole.

I always enjoy reading Throne of Salt's Slush Pile posts (The most recent of which is, PRIME HELLSITE SALVAGE) so i thought i might do my own where i just... copy segments of my slush piles into a post.

All of these are drawn from the slush piles for Aclas, my industrial revolution setting.

The Numina(Genius Loci) of Per Talis is a giant Sand-whale Spirit called Utuqa-Yom. He’s very contemplative and peaceful.

The Sand-whale is usually used as the national emblem of the Talisan people.

Per Talis is saturated with ambient magic for reasons unknown, but perhaps linked to an ancient magical catastrophe that brought down the Crystal Coalition, and killed Utuqa-Yom’s predecessor. They tried to make the desert green, and accidentally began a war with the spirits, causing mass casualties on both sides, and making the desert even less green, drying rivers, emptying wells and killing whole regions of grassland. This is the source of all those ancient ruins that stud Per Talis like gems.

Hell’s Palm, in Per Talis, is where the previous Numina of the desert, a sky-leviathan wind spirit called Death-by-Thirst, was killed by the magics of the Crystal Coalition. His dying curse has turned Hell’s Palm utterly impassable to all but the most determined and insane of travellers. Perfect place to hide something important!

Xhetev is well known for its lucrative goldmines. It’s often called the City of Coins. Lotus pattern tiles, huge, square arches, gold plaques above rooftops. Sun plazas, open fronted bars, silk awnings and long seaside walks. Many terraces and no towers. Sun-into-lotus pattern is as omnipresent as large pools of water with lotuses floating in them.

The prison-town of Ahnverrat in Lhokar. A ruin with an aerodrome-fortress at the middle, with access to the only water in town. Unruly prisoners get to experience true thirst in the parched desert air. There’s miles of trackless sand all around. Ahnverrat used to lie on a small river, but the river dried up because its spirit was killed. The dry riverbed still cuts through town, although the parts in the desert are long since swept away.

Sythiram Waterway, a qanat in Lhokar so vast as to count as a dungeon. The Keeper of the Waterway is a retired Lhokarian adventurer, who secured the position by his great fame and wealth. He is Bhal Thahan. He used to be a rake, airship pirate, legend and gunslinger. He’s still all of these things, but now he’s old and has a limp. He’s covered in the traditional Blue Lhokarian tattoos, and wears only black and white – aside from the holy gold serpent torc he totally didn’t steal. The position gives him Sythiram Manse, a peaceful stone house that sits on an island in the middle of the waterway.

Adavor has never had kings or princes. They have a long history of acclaimed and elected Precepts, including Zeria the Great, famous healer and missionary. They’ve never had proper democracy, mind you. The current state of being ruled by priests somewhat chafes at the Adavoran nobility, while the local Vox Populi hate the entire system.

The leaders of the Faceless are the Visages, a council of seven old Faceless wearing seven masks each (One on the face, some on shoulders/arms/chests). They’re all skilled rogues, although long retired. Their main asset is the Library of Faces, where the masks of every skilled and notorious Faceless are kept. Their souls can be asked questions via these masks, giving the Faceless a strong advantage of knowledge against the Market, Enterprise and Kingdom.

The Ikarine Lowlands are like the Okavango in terrain type. They only flood in late-Spring and Summer, due to snowmelt and heavy monsoons in the Igaya Mountains, which form Ikaros’ border with everywhere else. The plains dry up by the beginning of Autumn (which is still growing season as far south as Ikaros). In autumn, the alluvial plains are planted with many, many rich crops, which are then harvested before the floods come again in Spring, when the winter mountain snows have replenished the stores of water.

The living are a nervous minority in the Revenant Empire. Some have ‘ascended’ to join the ranks of the necropolitan dead, while others are merely a source of corpses for the Revenants to inhabit.

The Empire’s Revenant population is fixed at exactly 3,456,112 souls, give or take those who immigrate, those who ascend or the few that are permanently destroyed. The population inhabit new bodies when their current ones are decayed. All are as old as the Empire itself. Some were old at the time of the curse, some were children, and have mentally grown, having barely ever known life.

The Revenant Empire pays a lot of money for fresh corpses every year.

The following image is how the terrain outside Kadashek in Ulran looks in summer, when the dunes seasonally flood. The fauna in the Desert of Lagoons include large scarlet ibises and big, sleek otters. The spirit of the location is a red ibis-otter called Divided-in-Kind. 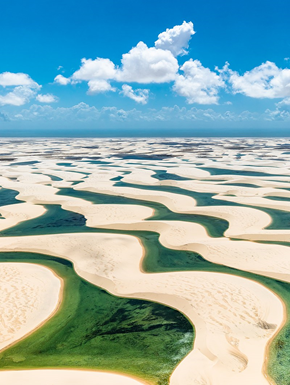