It is widely accepted that geometric patterns in ink, scar or star can control the flow of magic. This is why the constellations are called the Maker's Spellbook.
For those who know this, a question is often asked: is the mind of the mage required, or does magic flow down any channel, heedless, irrgating the world with chaos?
The answers to these questions may be found in the shell of the Skitterjaw. Endemic to a single region of the frozen Republic of Wurmgar, these titan centipedes can be found stalking a wetland known as the Dead Fens.
The Dead Fens are part of the watershed of the River Vok, which skirts along the Grave Ridge, where the bones of gods are said to lie, and continues to distant Xarrac to the east. These fens are known for their blood-red algal blooms, and the huge spires of 'godbone', carried from the Grave Ridge by storms, landslides and ancient glaciation. 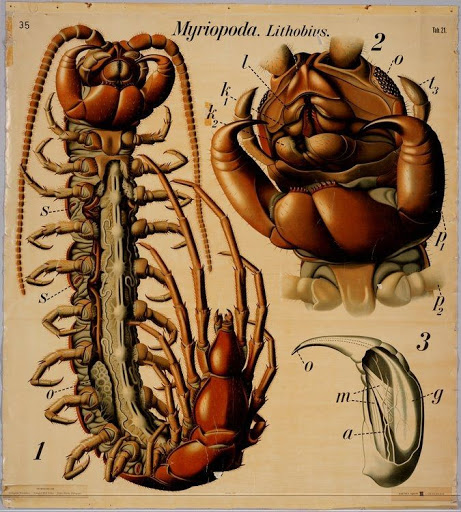 The Skitterjaws themselves are apex predators, 20ft. long, with poisonous, greatsword sized mandibles. They hunt the giant toads and catoblepas of the Fens as their primary food, but will gladly eat folk, little morsels though they are.
This is not what terrifies folk. What does terrify folk, keeping children and soldiers alike awake at night in nearby Tzorovik, is the Skitterjaws' use of powerful, primitive necromancy.
In short, it reanimates its victims. A skitterjaw's horde of shambling, rotten zombies is never far behind it, mostly swamp fauna, but always with a few unfortunate folk shambling alongside.
The skitterjaws' use of the undead is threefold - first, they serve as excellent defense, either guarding the skitterjaw's feeding grounds or accompanying the creature itself. Second, they provide temperature control and defense for the beast by clinging to it, forming an 'armour' of corpses. Third, the mobile, sturdy undead provide perfect repositories for the fist-sized, glistening eggs of the Skitterjaw.
Rival Skitterjaws have been observed using their hordes to resolve conflicts, with the winner reanimating the usable parts of the loser's legion, and the loser fleeing unharmed into the bogs.
Stats for these horrible boys:

Skitterjaw
Level 7 Def plate Jaws 2d6 (Save or take +1d6)
Move fast Climb spider Str 8 Int 3 Dis hungry
Zombies - A given Skitterjaw is surrounded by a horde of 3d6 shambling undead. Roughly a third will have large, translucent eggs protruding from their torsos, containing juvenile skitterlings. The Skitterjaw is violently protective of undead containing eggs, and uncaring for those that do not. The Skitterjaw can take one turn to raise any nearby corpse as a zombie.
Thick Chitin - Any damage dealt by a slashing weapon is reduced to 1. On the other hand, smashing or bludgeoning weapons like hammers deal an extra 3 damage per attack, as the Chitin cracks and splits.
Undead Armour - The Skitterjaw can command any number of zombies to cling to it, reducing incoming damage by one point for each two zombies. It knows to split its undead between armour and attackers.
Phobia - Skitterjaws dislike leaving the comforting fogs of the Dead Fens, and hate direct sunlight or large fires.

The Legion of Gold

The word for that epithet in Old Infernal is Yugoloth. 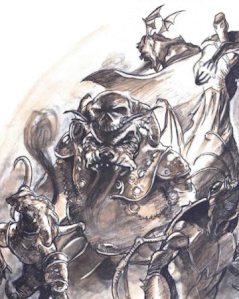 The Yugoloths are not a species.

They are a polity, an army, a disparate, self-cannibalising, disloyal, destructive, heaving legion, constructed of the myriad castoff Fiendish kinds created by those ancient avatars of true evil, the Baernaloths. Even the evil of the Abyss pales compared to their foul campaign across creation, waged since magic was young.

Among their numbers they count many loyal strains of fiends - the leadercaste called 'Ultroloth', or 'Masterful Soldier', or the low-ranking thugs referred to as the 'Dhergoloth', or 'Hungry Soldiers', for example.

These species have their own names, but they are unknown to mortals, perhaps even to their fellows in the Legion.

Some, less loyal, who are neither Tanar'ri nor Baatezu, drift closer to their orbit - the Oni of Acheron, the Concubi of the Abyss, the Ravaasta of Hades (who are called 'Arcanoloths' by some).

Every kind of fiend - exiled Tanar'ri, hideous Vaporighu, defecting Baatezu, bizarre Maelephants, secretive Gehreleths, scheming Night Hags, surviving Obyriths and even the supposedly independent Rakshasa, can count representatives within the Legion - and enemies without it.

What of the Legion's leadership? Certainly, the Ultroloths hold authority, and they hold above all their lord, the General of Gehenna. Supposedly, when the General sits upon the Siege Perilous, (his throne of petrified, living demons) which lies atop Khin-Oin, the Godbone Tower, the End of All Things will begin.

In his absence, the High Oinoloth, a master plague-crafter, is scheming chancellor of the great tower.

The Legion's founders, the Baernaloths, embody a form of utterly apathetic, sociopathic evil - a kind of almost banal, low-level, omnidirectional hate, without passion.

They saw everything but themselves as an object or a tool, to be taken, used, broken, and discarded. They do not lead the Legion - indeed, most fear it, as almost all of the ancient Baernaloths met their end at the blades and claws of their spawn.

It was this first rebellion that inspired the Baernaloths to create the Books of Keeping,  ancient tomes, now lost, which contained in their four-hundred and forty four volumes the names of every member of the Legion.

Most were burnt by the vengeful 'Loths, and, by now, the Legion's numbers far exceed such paltry records.

The potential of the Books as a weapon against the Legion is a strange and baseless rumour - some say spread by the Yugoloths themselves, to decieve their adversaries.

What of their laws? They hold none, not any more, none but the Law of Gold, the reason and excuse for the Legion's mercenary actions across the Multiverse.

None judge a Canoloth for guarding a vault in the City of Doors. None judge an Arcanaloth that illicitly advises a Bytopian Sphinx on matters of magic. None judge an Ultroloth for leading an army across some Prime Plane. None would even judge a Dhergoloth for taking a contract to knit.

So long as the Law of Gold is not broached - 'Nothing Costs Nothing'.

The Legion think in expenditures and profits, an attitude beaten into them by millions of years of commerce, slavery and mercenerial wars.

There are no mercenaries their equal in all creation. They act with professionalism, ruthlessness and skill (if not charm or class), as long as their payment persists. Mortals refer to the Primeval Pacts of Baator and the loose agreements of the Abyss as 'Contracts', but the Legion are the only fiendish organisation with a specialist caste of contract lawyers (The Yagnoloths).

They are not the teeming horde of the Abyss, nor the faceless myrmidons of Hell. They are the elite. They use all the most modern technology - the average Ultroloth wields a jezail armed with silver shot, alongside the traditional longsword.

The conflict to which they devote most of their time is the eternal Blood War, a conflict which many accuse them of both sparking and prolonging, for their benefit. 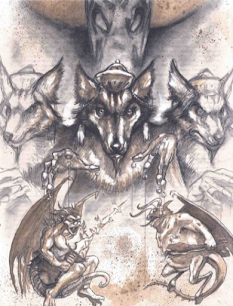 To the average mortal, for whom greed and violence are common, the Legion are at once the most understandable, and the most reprehensible of all the Fiends.

Cleric Domain of Dungeons – offered by gods of Traps and Loot – for example, Kurtulmak.

At 1st Level, you learn the Mage Hand cantrip, and gain proficiency with Thieves’ Tools and Tinker’s Tools.

A good Dungeon Cleric knows when to get the hell out of there. You can Disengage as a Bonus Action.

Channel Divinity: Timing is Everything

Beginning at 2nd Level, when you cast a Cleric Spell of 1st Level or higher, you may expend your Channel Divinity and make that spell into a Glyph, which you then apply to any surface you can touch, including skin or objects such as shields. At any point within the next 24 hours, you may use your Reaction to cast the Spell from that Glyph’s space. If you don’t within 24 hours, the magic fades.

Beginning at 6th Level, when you would make a Dexterity, Constitution or Strength saving throw, you can use your reaction to gain advantage on that save as the luck of the trap-maker saves you. You can use this a number of times per Long Rest equal to your Wisdom Modifier.

Starting at 8th level, you add your Wisdom modifier to the damage you deal with any cleric cantrip.

You Fell Right into My Trap

When an enemy makes a Saving Throw against an effect that you set up beforehand (i.e. did not cast this round) it has Disadvantage and loses the Evasion feature if it has it. If it fails its save, you regain one Channel Divinity.