Based on the Skill System of Disco Elysium.

Credit to Dan over at Throne of Salt for putting the idea forward here.  And thanks to the neatly maintained and charmingly written Disco Elysium Wiki. 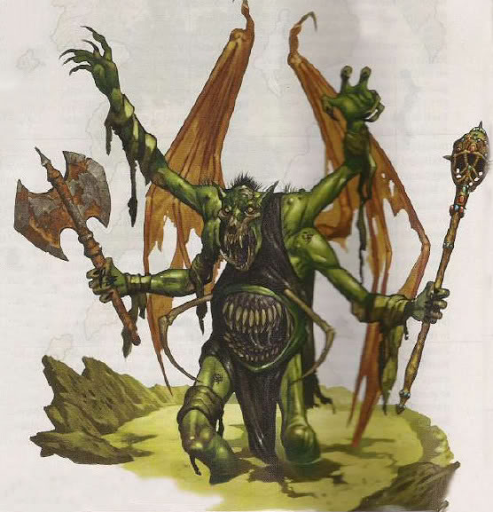 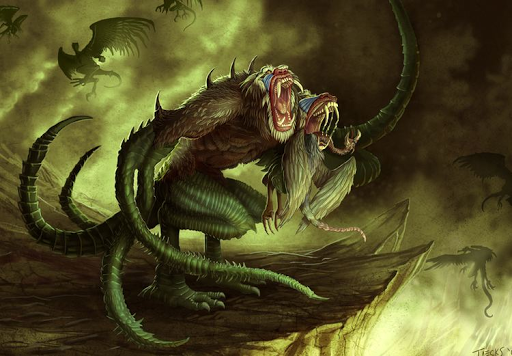 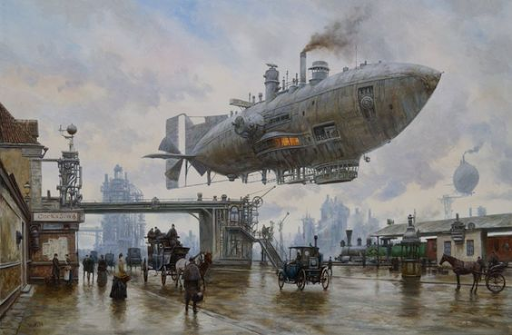 As Sahh of the OSR Discord challenged: a d100 Loot the Body for Aclas.

Feel free to roll a few d100s and see what you find!

Again, this is specifically Iskadar, the city where all the different cultural regions overlap. Each region would have it’s own weird table.

But first, the image to which I was assigned: 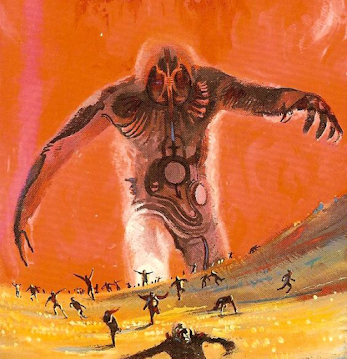 A conundrum, to be sure... for a fool! For I know exactly what this image depicts! To wit:

Created by the Damn'd Bio-Diabolists of Ancient Kelkahir, these titan abominations were first used as weapons of war by the Goathead Emperors, but were then turned loose after their final imperial fall.

They wandered the countryside of Kelkahir, reducing entire fields to nothingness with their blasphemous presence and driving ahead of them legions of screaming, flailing ghouls.

The last of them were killed by the Seventy Knights and their Flying Swords of Cosmic Law - but too late to save Kelkahir, now the Screaming Lands, a dead waste, where they say worse Bio-Diabolisms remain unfound.

Ahh. The power of the pong.

TO YOU, THE ORRERY: 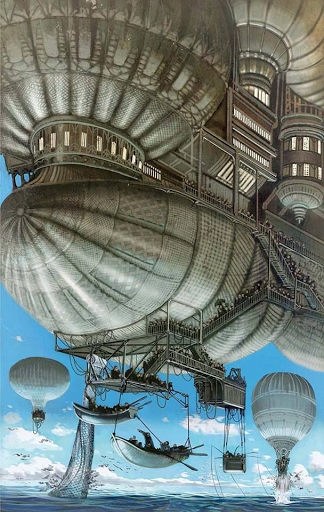 AND TO YE, PURPLE ONE: 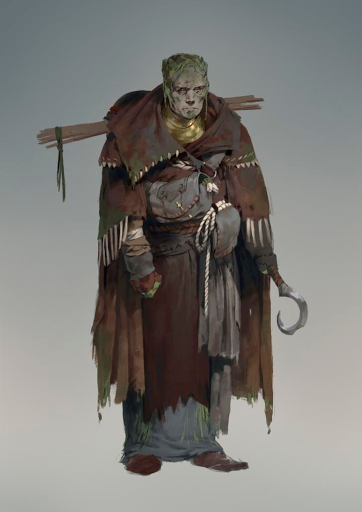 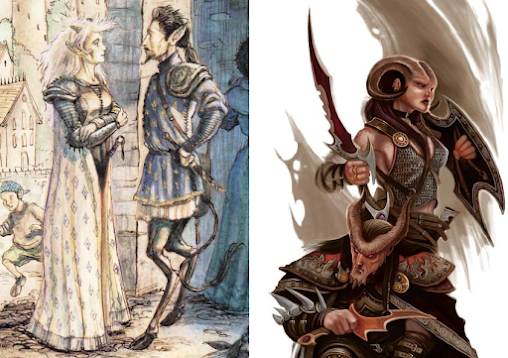 For a Tiefling PC in Planescape.

I like both the 2e → 3e and the 4e → 5e Tiefling. So i decided to combine that rad new aesthetic with the cool old variability.

To set a baseline, here’s some traits most Tieflings share:

Most Tieflings roll 2 Variances. If they conflict, either combine them weirdly (two sets of eyes, perhaps) or re-roll. 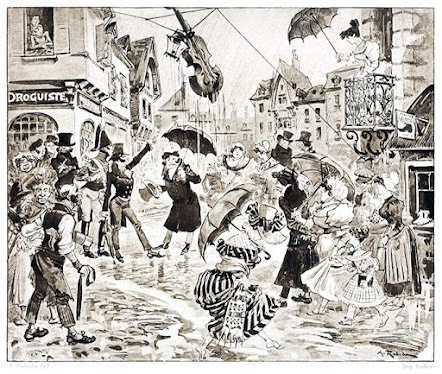 I was supplied with this image, which depicts:

BEDLAM IN THE STREETS AFTER HALLUCINOGENIC FUNGUS GETS IN THE GIN.

In outer Nethelos, disaster today as the city's famous Dry Neth Gin was infected with a kind of hallucinogenic fungus under study at the College.

We saw people stumbling around the streets, musical instruments up on wires and general hallucinatory bedlam.

The responsibilty of the college for allowing its escape (perhaps as part of a student prank!) is yet to be determined.

As part of The Response, i was assigned this image by the Purple One. 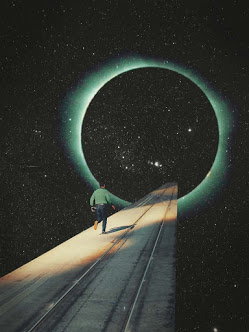 This is, clearly, a modern day spatiomancer who's figured out how to extend his walkway beyond the limits of the real and is leaving via portal to join in the great wizard wars beyond time.

TO YE, THE COSMIC ORRERY 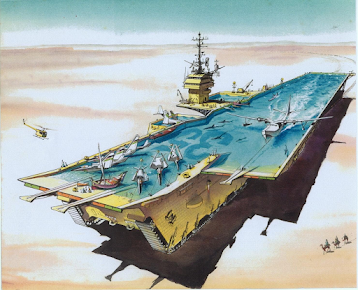 AND TO THE PURPLECTHULHU WITH THE VELVET INKS AND CRYSTAL FIRES 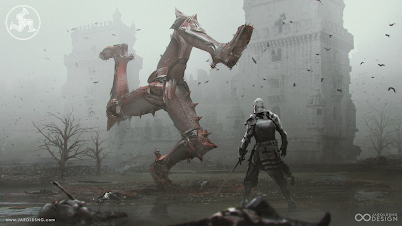 13 Items But It's Aclas This Time

Jojiro of Dungeon Antology pointed out, with fair reasoning, that he was expecting the 13 items post to be about my main setting, Aclas.

Here's what's on the person of someone you might bump into in the streets of Iskadar. 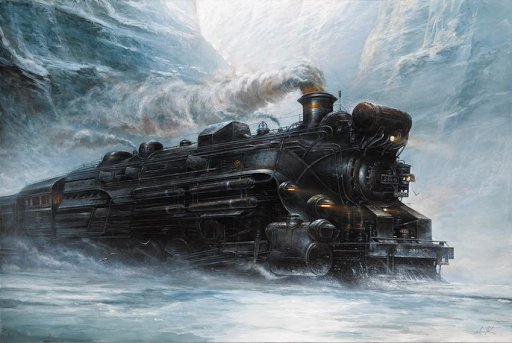 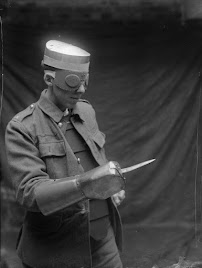 1. Is there Blood Magic? Necromancy? Can I start off with these powers or do I have to get them d-d-d-diegetically? Will these things get me hanged/drawn, quartered and burned over water/tortured/burned at the stake? Is your Necromancer working off the "divination from the dead" definition or is it cool?

There's absolutely both Blood Magic and Necromancy! You can definitely start with them, yeah. They're considered 'Red Magic', so the reaction varies.

On the one hand, performing necromantic acts in the former Union or the great old states of Etra will see you in front of a firing squad (should they catch you) - but in Cantos, necromancy is accepted, and all of the government leaders are necromancers.

So called 'Blue Necromancy' is the divination from the dead/speak with dead kind, you can learn it at acceptable wizard institutions across the world.

'Red Necromancy' is the kind everyone thinks of. The other 90% of the school is that.

All of it's just fragments of the greater lost art of Biomancy, but don't tell anyone.

2. Will my limbs get hacked off? Can I get new limbs? Do they have to be human or can I have monster parts? Is there a class that does all this or is it just an NPC?

Yes, Yes, Yes and There Isn't a Class Yet.

3. When was the last plague in the setting and how soon can we expect the next one? Can we swindle people by selling fake plague cures?

Disease outbreaks happen all the time, but the last Really Big Plague was Constellar Fever, about 47 years ago. The infected ended up with magic-charged rashes with little glowing points of burning magic in them that looked like constellations. Some say the rashes were heretic spell-diagrams, if read correctly.

You can swindle people in all manner of ways, this is no exception.

4. Cannibalism gives you: A) Kuru, B) Magical Powers, C) Full stomach, D) Yet Another Unexpected Twist ?

It's a matter of commitment.

Huh. Good question. There's no flying or resurrection spells in the setting, does that count?

Email ThisBlogThis!Share to TwitterShare to FacebookShare to Pinterest
Labels: Slush

For a Pirate Setting. Might end up as a GLOGhack, dunno. 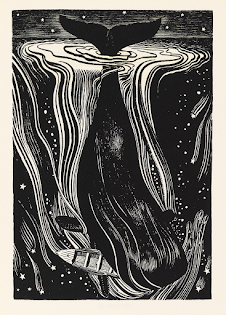 Come in all colours and shapes.

Like Fire, in that they spread, they destroy - and they drown quicker and easier than anyone else.

They dance brightly, cause a lot of chaos, and are gone just as quick, with naught but ash remainder.

Originators of blacksmithery, gunpowder and sailing ships. Myths say they invented the last since Mother Sea rejected them, which is why they’re good at drowning.

Firefolk blood is warm and red.

Like Stone, in that the only thing that ages them is the wind and rain, and that they can neith’r swim or drown.

Stonefolk become rocks, if something manages to kill them.

Stonefolk often walk along the bottom of harbours - though falling into the rolling main is as good as death, even if you cannot drown. They approach with patience, caution and determination.

Stonefolk blood is cold and clear. It resembles spring water, but is actually quite poisonous to other folk.

Numerous in the forested interior of Nauswood. Historians and philosophers. Original inhabitants of the Nauswood land.

Bark-clad folk with leaves for hair. Come in any appearance a tree does. Feet like roots, sturdy bodies, long limbs. They’re not trees, themselves, but they’re kin to them.

Like Trees, in that they never halt growing, fear fire and float upon water. Usually find ships unsettling, in the way you might find a ship made of animal bones unsettling. Can stand perfectly still for hours at a time. Very hard to tell a dead treefolk from a live one.

Treefolk become trees when they die.

Their never-halting growth means you can only play a young (<200) treefolk, since their true elders (>600) are half of what’s referred to as Giants.

Treefolk blood is tepid, viscous and honey-red, like sap.

Like Clouds, they seem to weigh very little, and are always above the sea - Cloudfolk physically can’t get underwater.  Cloudfolk are immune to fall damage, but can be quite easily blown away in a gale. Often wanderers. Rarely use guns for reasons known only to them.

Cloudfolk evaporate when they die.

Many cloudfolk have long, canoeish boats that can sail on clouds. You do, as well. It’s only a one-person boat, however, and cloud-sailing has its own challenges (such as the big fucking gaps).

Are Whales. You can play a Whale, should you want, but it’s hard to do piracy as a whale. Oldest of Sea’s childr’n, by fathoms.

Like Sea, in that they’re vast, capricious, and terribly powerful. They can speak the Small Speech, certainly, but never will unless provok’d by some terrible insult or desperate plea. Most know powerful magic and are glad to form allegiance with the Young Kin and their ships.

Nobody knows how Seafolk die. Most assume they secretly return to Sea, as whalefall or whispered tidal ghost.

As Giants are to Treefolk and Cloudfolk, Leviathans are to Seafolk. 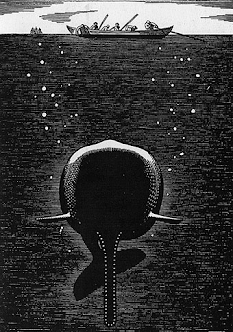 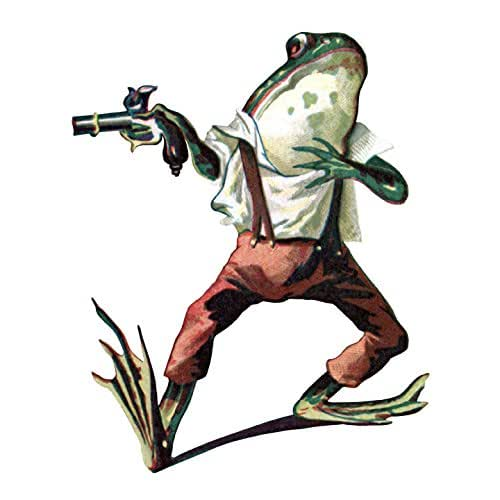 1. Iron Lungs
◊ - Hold your breath indefinitely with no adverse effects.
◊◊ - Hold X litres of liquid in your lungs, with no ill effects, where X is your HP.
◊◊◊ - Take a breath so deep that you can knock people over by exhaling sharply on them.
2. Standing Leap
◊ - With no prep, you can jump your own height, vertically.
◊◊ - With a minute of prep, you can jump twice your own height, vertically.
◊◊◊ - With a minute of prep, and a small run up, you can jump four times your own height vertically.
3. Rope-With-Glue-On-It
◊ - You have a rope with glue on it. The glue has to be activated by applying another chemical, which you also have.
◊◊ - You can deftly wield two glue ropes.
◊◊◊ - You can hide a glue rope in your throat and spit it out with great force. You can hide the activating chemical in your mouth, also.
4. Poison Toad
◊ - You take half damage from any poisons.
◊◊ - You take no damage from any poisons, and your blood is a mild poison.
◊◊◊ - On death, you release a cloud of poison gas that deals 4d6 Damage to anyone standing next to your corpse.
5. Second Story Worker
◊ - You can climb vertical surfaces as quickly as you can walk.
◊◊ - Double your move speed and horizontal jump distance.
◊◊◊ - You can climb upside down as quickly as you can walk. Halve fall damage.
6. Friendly Toad
◊ - As an ally, you have a perfectly normal, immortal, invulnerable toad.
◊◊ - Your friendly invulnerable toad is now dog sized. Still just a toad.
◊◊◊ - Your friendly invulnerable toad is now horse sized.
at February 02, 2021 No comments: