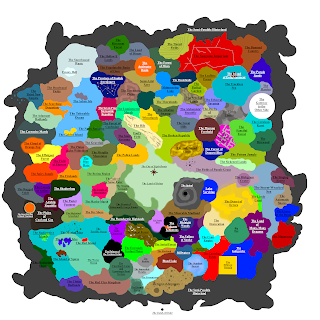 I made this hellish mess of a map for a one-shot i played with my regular D&D group (the main game being on break due to The Extenuating Circumstances).

The plan for the oneshot was to play characters from d-and-wiki's much maligned 5th Edition homebrew section.

(https://www.dandwiki.com/wiki/5e_Homebrew - Enter at your own risk)

It was, in my opinion, a success.

We had a small horse armed with various magicks and the ineffable power of Dad (wielding a blade which says World's ---- Dad).

A blind, deaf pile of dirt, who rode around on a magic horse and was in service to the Chromatic Lords, the icons of chaos.

An illithid ninja so edgy one could cut themselves by looking at them - who also had a thrillingly abysmal Strength and Charisma score.

And then, an immortal martial-arts demigod who used Demogorgon as a butler.

He was phased out around halfway through for a variety of reasons, replaced by a suit of armour containing a hungover ghost, with a melee range gun.

The 'setting', for lack of a better word, was Anarchia, a hellish hex-crawl through these psychedelic danger-zones. I enjoyed it immensely. Probably would work best in Troika! Who knows?

The idea was that Anarchia was once Aleria, an entirely ordinary and pleasant fantasy setting, perhaps of the Dragonlance variety, that got neatly and thoroughly explodafucked, into a region of unreality called the Void of Chaos.

Every person became an immortal, nutty mutant with a wide variety of goofy powers - hence, the oneshot.
at June 29, 2020 No comments:

Perhaps Monster Munch will become a series where i ramble non-comittally about creatures.

Is Outsider still accurate in 5e? I've never played any other edition, but i tend not to confer with 5e sourcebooks too much, when writing for my fantasy elf-game.

I personally like using the term Outsider to encompass anything weird and non-mortal in Planescape. It's such a broad, useless, and material-plane-centric term, that it really fits with the philosophical and... perspectival (?) themes of Planescape.

The issue with the Outsiders is, DMs tend to run them exactly the same.

Modrons, Slaad, Fiends, Celestials, and everything else, get played as mindless drones that attack your (probably 'Chaotic Neutral') party on sight and fight to the death. Occasionally they proclaim whichever planar bigshot they serve in a snarly monster voice (or robot voice, or angel voice, you get the idea.)

I think the reason that Devils/Baatezu and Demons/Tanar'ri work is that they've got an alien mindset.

Baatezu only respect Writ and Wit, so to speak - sure, you're mighty, but do you have any legal authority? Everything is based on how the current situation relates to The Law, and how far those rules can be bent and broken.  Even defecting Baatezu consider things in relation to systems - Baateu don't age, and most of them are many thousands of years old. Defectors have been having Asmodean propaganda drilled into their heads for millenia. Pretty hard to escape that.

Tanar'ri respect only power - or the illusion thereof. Theirs is a 'society' which utterly lacks the bonds of love, mercy, identity, currency, law - fuck, the Abyss doesn't even have a flag! Ironically, I tend to find that the ordered Baatezu make more sense as individuals that work together, whereas the chaotic Tanar'ri make me think more as, while creatures in their own right, parts of the greater Abyssal consciousness. All Planes have a sense of aliveness to them, but the Abyss is the most 'awake', so to speak.

These mindsets work because they are divorced from the human mindset - which could probably be defined as being equal parts fear, greed and love, to make a truly staggering generalisation.

The alien mindsets really put the Out in Outsider.

This is also why, on the whole, the Yugoloths don't work. What do they want? Good question! It's entirely hazy, and has been, since it was decided that there needed to be 'Neutral Evil' fiends, for the purpose of grid filling.

Do the Yugoloths want wealth? They seem to, yes, but that's not exactly alien. Humans do evil for money all the time. It ends up making the Yugoloths seem like people, which isn't the idea at all.

'Nobody knows' is not a helpful answer for DMs - to translate that, 'the designers couldn't think of anything.' This contributes precisely dick to anything.

In my own Planescape games, I usually fall back on the idea that Yugolothic culture encourages the Mercenary Fiends to be just that - disloyal and utterly, all-consumingly narcissistic. Selflessness is completely alien to the Yugoloths. Everything is adjudicated in how it relates to the Yugoloths' own personal gain, down to the inanimate.

If you create a weird, magical monster with entirely human goals, it may as well be a human with weird, magical powers. Make alien creatures think in alien ways. It makes them more interesting.