This class was inspired by Mordolic, but honestly it can probably be hacked into any weird setting with post-medieval tech. 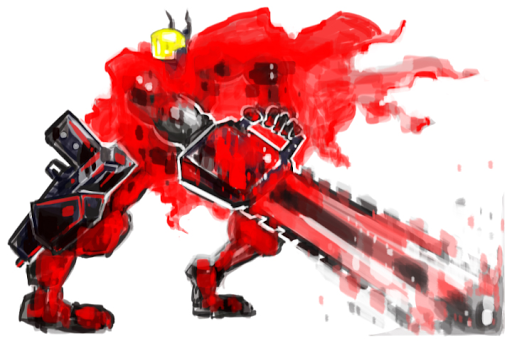 Each Template, you lose Max HP due to the corrupting influence of your demonbuilt mechanical armour and extremely evil sword.

You have a longsword which is also an electrified chainsaw. It deals 2d6+STR Damage on a hit when activated, and 1+STR when not activated. You must expend a Charge every time you want to activate it, which activates it for a minute.

Charges are gained by killing people with the sword. A demon lives in there, and will eternally haunt your nightmares if you activate the sword even once.

If you roll a Critical Hit, it deals 5d6+STR Damage and sprays gore everywhere.

On a fumble, the chain breaks and you suffer 2d6 Damage.

It also functions in the normal manner of a chainsaw while activated.

You’re clad in heavy, mechanised armour. While wearing it, you have +1 STR.

Once per combat, you may decide to suffer no damage from an effect that isn’t lightning or fire.

Whenever you kill someone with your WIRE OPERATED KILLING SWORD, the nearest enemy must Save vs. Fear.

If a creature has failed a Save vs. Fear, they take double damage from your attacks.

When you drop to 0HP or die, you may choose to Revenant. You do not suffer the effects of death until danger has passed, upon which you explode gorily and are condemned to Hell forever.