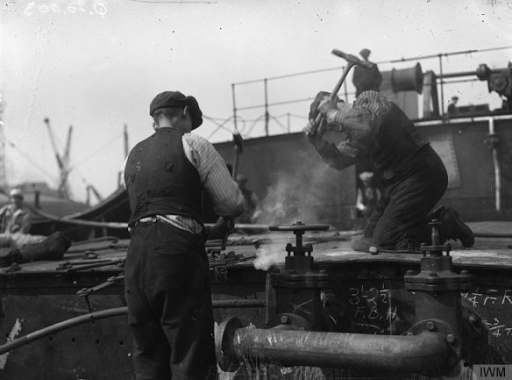 own at Taskill’s Yards, a foreman called Charles McDowall sits, passing a Slowfall Rivet from one hand to the other.

It’s a thin enchantment. It slows a rivet in flight - flung hot from the furnace to be caught by the riveters. Enchanting all the rivets is cheaper than buying head protection.

The culture of the yards would not allow the helmets, anyway. McDowall passes the rivet back and forth, watching it arc slowly in the air.

The enchantment fades eventually. But what if it didn’t?

McDowall claps on his dut – bowler hat – and heads for management. They laugh him out the door, Too expensive! Too useless!

So he heads to the Riveter’s shed, and talks to the union men.

Within the month, the first long-fall rivets are being installed into a ship – the HMS Boot, a small supply ship, intended for Endon’s navy.

Crowds gather for the traditional launch celebration, and boggle as it glides ever so slowly and silently down the ramp, gently scudding the waters of the Scoury. No rattling chains, no titan boom. It’s a bit… odd.

Sailing on the Boot is a bizarre experience. The waves lift it, then it glides, scuds along the top, slapping heedlessly through waves. It’s unsettling – but hell, if it isn’t fast.

Endonites nickname it the ‘jumping ship’.

Jumping Ships are now the sole kind produced by Taskill’s Yards, to the derision and nearly-envy of their sister yards.

McDowall and his associates – neds in welding masks wielding rivet guns and tongs – are the kings of the yard. To polite society’s horror, they’ve bought or forced out Mr. Taskill and most of the rest of the board.

Now, the Navy get involved. They “sail” up from Endon on the Boot itself. They enquire about stability, about greater height, and about putting guns on it.

McDowall hires the wizard who invented the Slowfall Rivet, a very practical machinist by the name of Isla Paisley.

McDowall pays Paisley a verrah big sum of money, and, within 6 months, something new – the Stalling Rivet.

It doesn’t just slow the fall – it arrests it completely. And now the Navy are interested.

Of course, the first thing to change are the propellers – designed to push air, not water.

The Boot is refitted. It is now the world’s first air-destroyer. Great heights are hard to achieve, and strong winds can be a buggerance – but to see an iron-hulled ship dodge clean off the river, and head south overland to Endon, well, what a sight.

Of course, Paisley never brings up the degradation of the enchantments. Sure, they fall apart quicker than the Slowfall rivets, but – unless they load a really god-awful amount of weight onto it, it should be fine?

Paisley takes her money and moves to Endon. She’s off (with all her fellow Levitationists) to bring her version of the Gravity Defying Art down south.

McDowall is the sole owner of Taskill’s Yards. His airships have made him mind-bogglingly rich. Rich enough to replace his union allies with sharply-dressed Endonites, now here to keep the yards in check.

The drydocks themselves levitate now, stacked three high like the Tower of Babel. The other yards still launch old-ships. But Taskill’s takes command of the sky. At all hours, tankers, cruisers and rooftop skimming warships glide about over St. Enoch, buzzing the spires and casting entire streets into shadow.

It’s never been easier to get to Foreign Parts – holiday resorts and invasion beachheads alike blossom on distant shores.

And certainly, you hear a story or two of a ship’s flight faltering, but – we can blame the weather, right?

In a draughtsman’s office, three women and two men work through the night to lay out a plan.

The document is titled: HMS IMPUNITY.

It is the biggest ship ever laid down. It puts the rest of the Royal Navy to shame. It’s the length of Taskill’s Yard itself – and it will fly!

All the high society want to be on board for the launch. That’s the new fashion, of course, the thrilling feeling of sliding up into the sky. There hasn’t been an accident in 15 years.

Up from Endon, The King Himself, here to stand on the gunnel of his hubris and look down imperiously at the world.

The IMPUNITY rises, like the spectre of a new age, and floats out above central St. Enoch. Thousands  crowd in Royal Square beneath it, as it roars overhead, a divine storm-cloud of guns, hatches, view ports and colourful papier banners.

The survivors will never forget the whipcrack sound of the first rivet failing. 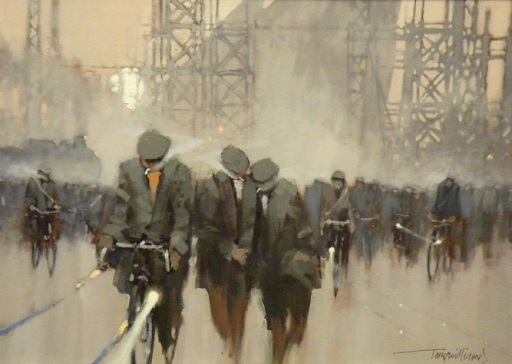 Alexander Avraham, asthmatic poet, stands alone in the Enoch Necropolis. He likes tombs. He likes being here, where the dead are, too. The dead are quiet. The dead don’t bother him.

Unfortunately, two of the living are bothering him. A pair of upper-class university students, who he feels deeply inadequate next to.

Avraham’s looking for poetic inspiration. He’s thinking about underworlds and death gods and mysterious cults, and he’s trying to block out Byrne’s confident oration on the state of St. Endon. Smythe is looking for a kind of magic to specialise in. He’s no abjurer, he doesn’t have enough art for illusion, and evocation is simply gauche.

Byrne says “And of course, we simply don’t have the workforce to compete with Endon. Simply less people live here. That’s what I’m trying to tell Professor Kerr – it is a matter of numbers, not of spirit.”

Avraham agrees. Then he says “Spirit, hm? Numbers...? Oh, suppose… the dead could work? There’s enough of them, here.”

Byrne gives him a Look. He goes red, realising that he has just advocated for necromancy. He begins to stammer a retraction, but Byrne is already walking away.

Smythe isn’t, though. Smythe is listening.

Byrne and Avraham leave the story here. They have an incredibly awkward and fruitful friendship in their remaining time.

Smythe, though, Smythe has just been given Ideas. He can’t focus. In the Gryphon Club, or at a ball, or playing golf, or wandering through Espergrove with a discrete friend, he cannot help but think of The Working Dead.

He’s no utopian. But even he sees the potential there. The living free to relax – while he makes money from the dead.

He buys a book. It is entitled Practical Necromancy. He’s caught with it, of course, but he's rich, and therefore merely eccentric. His father pays off the Polis – and Enoch has missed it’s chance to stop Smythe.

Later that day, with four friends and a shovel, he reanimates his first corpse.

Smythe’s Obedient Servants are marketed as automata. They’re bandaged, masked, plated in wood, swaddled in cloth and doused in perfume. You have to listen very closely for the flies.

A rash of graverobbing afflicts Enoch. The locals blame the Radicals, or, more often, hurl accusations across the sectarian divide.

The Servants are not allowed into houses. Society doesn’t take to them in that manner. But the mills do. And the chemical works. And the yards. The secret undead stumble silently from job to job – Smythe looks on from a catwalk or railing, patting his book and taking in money.

Lord Smythe, respected veteran of the Army, has, on an unrelated note, been working to decriminalise necromancy.

The resolution is passed in the City Chambers. Smythe pushes it through, because he is rich. It is titled the Industrial Reanimation Act. It is Legal.

Nobody says Necromancy, anymore. Smythe’s Obedient Servants will now purchase your discarded earthly shell upon your death. Wages plummet. The living can now only find work where the dead are too slow or stupid to do it right.

As you might expect, thousands starve, or flee this necropolis for the country.

The dead outnumber the living, in Enoch. The yards and mills are eery silent, safe for shuffling footsteps.

By now of course, high society loves the Noble Art of Reanimation. How foolish we were, they cry, to call it evil! Enoch is quiet, Enoch is prosperous, and best of all – Enoch is nearly empty. It’s just them, and their obedient workers. All those philistines and the heaving, unwashed masses have fled for the wilderness, where they belong!

Enoch is a tomb city. The closest people get now is to sneak into the outer districts and shamefully sign a contract to give up their carcass upon death.

The rich, too, are now looking for ways to Renanimate themselves. There’s a fad, a trend, for little bits of vampirism, a haute-couture half-lichdom, here and there – well dressed ghouls with lovely engraved cutlery.

There are two ways that this can end.

One. Endon arrive in force on their ships. They shoot Smythe in the head, and then every undead or necromancer noble along with him. Immediately, the loyal workforce of the dead are loosed from their shackles.

The army are caught in the narrow sandstone streets of this old tomb, and they are eaten.  A wave of the hungry dead rolls out along the High Road and into the east. It will even reach Endon, in time.

Two. Smythe is not stopped. He sacrifices half of the Upper-Class in a blood-soaked ritual at a ball, and becomes a Real Fucking Lich. His suits look just as good, but the flesh sloughs off his head. He puts on a crown of fingerbones, and declares himself King of Enoch.

Independence from Endon comes, although perhaps not in the way we all expected. Cavalier death knights rampage the roads – spectral secret police whip through the countryside like the sluagh, and always and everywhere, the dead.

Enoch is the Land of the Dead, now.