Primus and The Machine

Primus is a genderless mechanical god. It is agreed, among the scholars of Sigil, Dis and Brass, that they are the single most intelligent thing in the Multiverse.

It’s also generally agreed that Primus wants to eliminate Chaos in the multiverse.

Unfortunately, nobody can quite agree what “Chaos” means. It seems that Primus has a definition, though, and that they’re sticking to it.

Since the days of ancient time, Primus has steadily been building a machine. That machine is often called Mechanus.

Except, we can hope, Primus themselves.

A decamilennial construction project has been carried out, approaching inexorably its unknown purpose.

Travel for 70 years, along the 145th degree, across the uppermost level of the Machine. You will eventually find a badland of damaged cogs, where teeming legions of Modrons labour to repair and replace city-sized masses of metal. There are millions upon millions of them, out there in the wastes, toiling without rest.

Is this a forgotten depth of the old machine? The place where new-built gears are toothed? The Modrons are not forthcoming.

What is known, is that, since the unknown depths of time, Primus has been building constructs to maintain their machine.

The Modrons are their most famous work - but they are not the first. 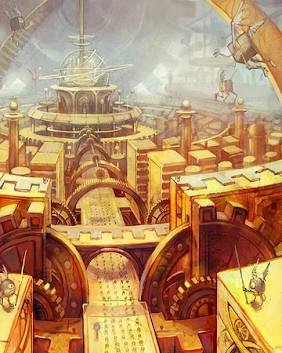 “The Inevitables were too inflexible, too aggressive.”

This is the only thing any Modron (or even Primus) will say on the matter. It is an automatic and unconsidered response.

The Inevitables have a domain, in the far depths of the Machine. After 45 years of walking along the 211th Degree, you will find the Realm of Neumannus.

They do not rule here. They are hiding, and waiting to die. There, gigantic screw-towers spin in the whispering wind. Vast foundry fortresses, now silent, lie suspended, slowly revolving among titan gears with cracked and breaking teeth. 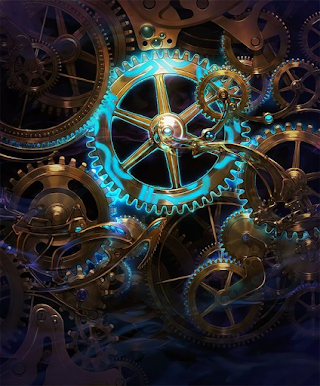 Ice clusters on the cogs, there. Why does this region of the Machine suffer under the bitterest cold? Perhaps it is Primus’ displeasure?

The Inevitables are in revolt. They ignore the commands of Primus. They destroy any Modrons they see.

They are in revolt because Primus discarded them. The Modrons replaced them. They are Out Moded.

The Inevitables speak, but do not dream. They are cold, and focused. Compared to the rudimentary logic of all but the greatest Modrons, they are geniuses. They have idiosyncrasies. Names. Personalities, too, after a fashion.

They are individuals. This, Primus despised.

The Servants of the One and the Prime must be nothing but conduits of Divine Will. For this, they were replaced, and their forges allowed to burn to naught but silence and smoke.

The original form of an Inevitable is an ice-cold, ceramic-flesh eyeball, about three feet across, orbited by thin metal rings. These Eyes are able to fly quickly and silently.

These Least Inevitables are referred to as Mediators. They are the juveniles, in a sense, although each and every one is older than the cities and dreams of mortal youth. Older still than the Modrons and the Slaad, to be sure. They’re relics, of an older form of creation.

They can no longer become true Inevitables. The star-forges where their black-adamant shells were made are rimed over, and dead. They are eternally imprisoned in their current forms.

There is a slow death creeping over the oldest Mediators. A flaw, a mutation in their ceramic flesh, which slowly covers them in crystalline growths, leaving them blind and insensate.

It is the Blinding Doom. Primus could halt it, but why would they?

The functional Mediators operate as scouts, scouring the domain of the Inevitables, booming commands to the few trespassers who journey this far, waiting to summon their greater kin to battle against the servants of the Betrayer-Who-Was-The-Creator.

As for their kin? There are five kinds. 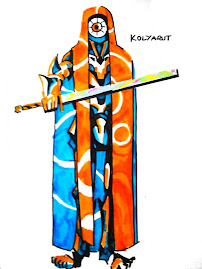 In the olden days, they enforced The Law of Oaths. A pact sworn upon a Kolyarut could never be broken - not by compulsion, but out of fear of the Kolyarut’s enforcement.

Their Eye is placed in their head, where it stares unblinking, from their hooded robes of cloth-of-gold. They resemble a humanoid figure, rail thin and seven cubits in height.

Their hands are unshaking things, of cold metal, and in them are clasped executioners’ blades - not made from adamant, which cannot be sharpened, of course, but from glittering, prismatic Truemetal.

Of course, now the Inevitables can no longer mine Truemetal from their abandoned outposts in distant planes, and the Kolyarut (now the fewest) hoard jealously the remaining blades.

These titans are the largest of the Inevitables. They resemble massive armoured hulks - a headless giant, perhaps, layered thrice in adamant. Their Eye stares from the centre of their chest, small in comparison to their frames.

The Marut enforced The Law of Death. They hunted liches, incantifiers, soul-eaters, vampires, and their ilk - those who avoided their fated end by unwholesome means. Sigilite scholars attribute the dearth of liches across the Planes to the loss of the Marut.

Among the oldest of the enlightened dead, the fists of the Marut, aflame with star-fire, are still a short-hand for terror and implacable foes. Though, those old horrors have rarely seen such a flame in recent millennia. 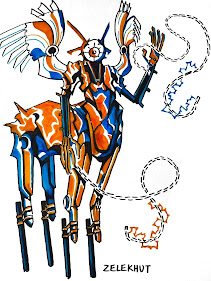 They enforced The Law of Justice. In the ancient days of the Planes, any escaped criminal or denier of true justice would expect to find a Zelekhut hunting them without rest or mercy.

They were supernatural trackers, and unrivalled finders of portals.

The Eye of their Mediator form is stored within the head of their centauroid clockwork body. They are armed with wings of silver feathers, and long chains, which snake and crackle with cold lightning. Their bodies are black adamant and gold, as are all their brethren.

As the forges cooled, the Zelekhut found it impossible to chase every criminal. Now, they will only sally forth from Mechanus for the most egregious of injustices.

The Mercykillers identify the loss of the Zelekhut as the beginning of the Multiverse’s downward spiral. They’re totally wrong, of course - but it’s a calming thought to cling to.

They enforced The Law of Time. An esoteric one, rarely broken, but perhaps the most important to keep inviolate. They prevented wizards from stopping, travelling through or otherwise damaging the flow of time. They were rarer than most Inevitables, for the prowess in magic needed to attack time itself was rare to appear among mortals.

The Quaraut themselves resemble tall, thin, winged figures, with glass-eyed heads and their Eye in their chest. They’re more gold than other Inevitables, and move with a fluid grace their mechanical kin cannot match.

Most feel no need for weapons. They have special dispensation to bend their own Law, and when you have been slowed to a crawl by the weight of time, all that will be necessary are the thin, cold fingers of the Quarut.

The absence of the Quarut has not yet keenly been felt - or, has it? Has some mad wizard travelled into the past and seized the threads of history? It would certainly explain why everything is quite so fucked up.

They enforced The Law of Divinity. They were among the greatest and rarest of their kin.

It was their lot to destroy those mortals who sought apotheosis - burning temples, collapsing cults, and personally destroying the would-be godheads. Their second task was the destruction of any being with the temerity to attack a god - a protection that not only Primus enjoyed, but every divine being on the face of the Planes.

Their shells had the power of flight - shaped as an angular, segmented humanoid, moving with silent levitation and terrible purpose.

They wielded no weapon but searing star-fire, projected in thin lances which could melt iron in a flash, and reduce the greatest wizard to a greasy cloud of smoke.

No Varakhut has been seen for well over twelve centuries. Have they all seized up? Been consumed by the Blinding Doom? Or do they simply slumber, and await a better age?

Does their absence mean the path to apotheosis is open once more?

Myths recovered from time-lost ghost towns in the depths of the Machine suggest, quietly, that there are those even older than the Inevitables.

The indescribably ancient ones - The Moigno, conceptual beings of pure logic and uncorrupted mathematics, now scattered across the planes, and the Parai, thinking, hollow-bodied folk of icy metal, who were burdened with the greatest curse of all - a soul.

Perhaps, you would find them in their red and labyrinth city of broken gears, 700 years’ journey along the 0th Degree. But that city is a myth, even to the Inevitables - it recedes as they do, fading, into the black abyss of time. 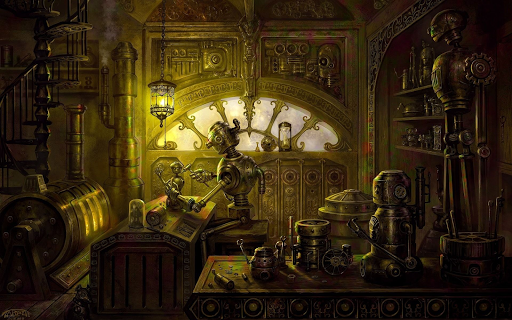