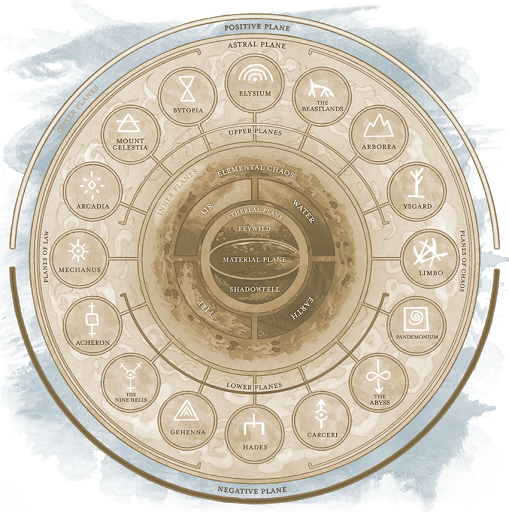 But why is it the Great Wheel?

It’s nice, to imagine the “Inner” and “Outer” Planes as vast, subtly turning gears - Machine in Mechanus, Machine of the Planes, Machine in the Soul.

But how do others see it?

To the Baatezu, reality is a Great Chain, not a wheel. At the top, The Seven Heavens and Material Plane, at the bottom, The Abyss. In the middle, The Nine Hells, the strongest link, holding down the Tanar’ric tide.

What about the Tanar’ri? To them, everything is The Abyss - a great soup of Tanar'ric flesh, roiling and boiling, full of stubborn little pockets of resistance, deep in the mass, soon to be consumed.

The Rilmani allege that every Plane shy of the Outlands is in fact one plane, The Counterweight, which weighs vastly against the great point of the Spire. Should any one faction gain dominance over the Counterweight, the weight will shift, the Spire will topple, and everything of consequence will be destroyed.

The Reaves of Acheron have a very simple Axial Model - on one end, Acheron, on the other, the Astral Sea - everything else is a tiny fragment of a bigger, older Acheron, which orbits around the axis inside the Far Realm.

The Dao of the Plane of Earth assert that reality consists of Towers, which hold apart the vastness of the Plane of Earth and the Plane of Air - most of these towers remain undiscovered, but of course the Mountain of Light on Arcadia, the Spire on the Outlands, the World Tree of Ysgard, and the Heavenly Mountain of Celestia are examples. The insectoid Baatezu are aping the true Towers with their tacky Pillar of Skulls, but what are you to do?

To the Night Hags, Reality consists of one massive fiendish plane, one massive material plane, and one massive celestial plane, each the rightful property of one of the Great Grandmothers - every part we view as a separate plane is merely a part of the Greater Three, separated by unimaginable distance.

The Sign of One alleges there are no planes. This is all a Dream in the mind of a sleeping god - Devils and Demons are her nightmares, the Archons her overactive psyche, us, the twitching neuroses of sleep - and the Lady of Pain, her realised self-conception.

The Bleak Cabal scoff at all this. Why bother arranging ultimately incomprehensible and meaningless subdivisions? What do you gain from this, hm? They propose - No Model, at all.

The Doomguard agree the Planes are arranged, but they dispute the characterisation as a wheel. To them, it makes more sense for the planes to be a Cluster, falling incoherently as they steadily distance from the Positive Energy Plane and plummet into the Negative Energy Plane while entropy takes hold.

The Ifrit of the Plane of Fire rank planes based on heat, in concentric spheres - The Furnace Model. Fire is the centre of the Multiverse, yes, and Brass is the centre of Fire. Near their Plane, the Positive Energy Plane and most of the Hells, and then the Heavens, the Outlands, then the Material Plane, then Mechanus, the other Elemental Planes, the Astral, and Ethereal and finally, the Frostfell, and the far flung colonies of the Hells - Stygia, Agathys, Acheron and Cania. 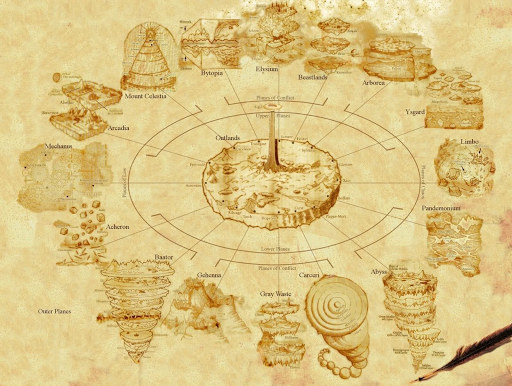 Ask the Azata of Arborea. To them, Reality continually reshapes based on the whims and friendships of the Gods - a Maze of Threads, where Planes drift closer and apart as their divine custodians do. They understand that Arborea sits at one end, and the Abyss at the other, such is the antipathy of Corellon and Lolth.

The model presented by the ancient Giantish Empire suggests that reality is a vast piece of craft, a Carven Statue, given animation by Kord, The Father of the Gods and head of the Ordning. They represent each plane as a stone organ within the body of this gigantic automaton - the greatest giant of all, simultaneously representative of, master over, and containing, the Ordning.

The cranioelectric philosophy of the Elder Brains suggests that the Planes are not divided by Space, but rather by Divided by Time - portals bring you to incalculably divided Epochs of one singular dimension - theirs.

The Legion of Gold has no use for cosmology. High minded ideals such as that have little use in Yugolothic society. But a few fringe elements among Legion-intelligentsia maintain a document, The Material Registrar, which records avenues of profit and business, and ranks the Planes based on such. The Lower and Material Planes feature prominently, while Mechanus and the Upper Planes languish in the appendices.

The Orthan Imperium, and their apparatus, the Harmonium, have a typically Orthocentric World-View: Ortho, crown jewel of reality, is the centre of the Material Plane. Arcadia and Mechanus orbit it like moons - every other plane is part of the Outer Sphere, which floats in the Astral Sea - apart from the Elemental Planes, which lie metaphysically within Ortho.

Those Slaad who can be bothered with philosophy - primarily Xanxost of Sigil - suggest that at least one philosophy common on Limbo is that of the Great Foam - reality is a series of ephemeral bubbles, divided arbitrarily and uncategorisably into a vast mess of portals, knots, demiplanes, intersections, transitive planes, sub-planes, pseudoplanes, and whatever the fuck Sigil is.

In a piece of pleasant planar irony, the Limbic Foam model is making great academic headway against the Mechanite Wheel model.

(This, funnily enough, matches almost exactly the Ironic Model posited by the Hound Archon Zanovir in her text Synchronicity - but that is, perhaps, a story for another time.)