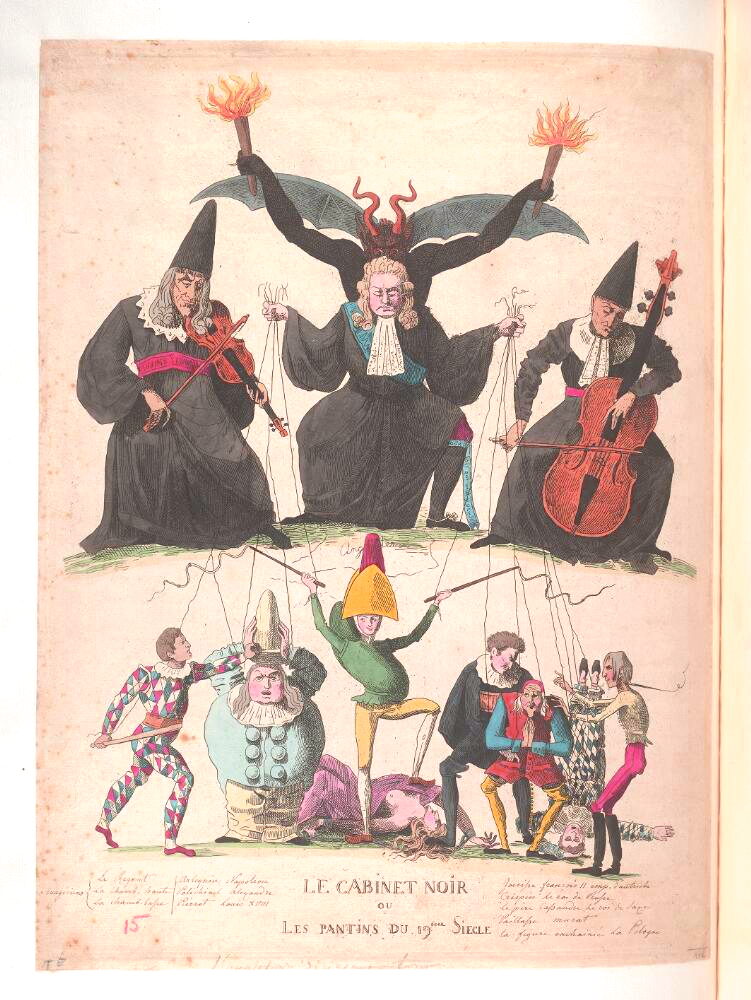 Dispater, the Lord of the Iron City of Dis, is unshakeably convinced that every devil in Hell is out to get him.

He can’t trust other devils. At all. First, most of them reside in Dis, and he is the one they have to be rid of to secure promotion. Second, he is the justice of Asmodeus, the judge of Hell. When a devil is punished and demoted, most often he signs the order. The built-up hatred for him across aeons is incalculable. Wizards have found demiplanes forged purely from the hate that exists for Dispater.

He hides away in his Iron Tower (of subjectively infinite height) and operates a dense network of spies, secret police, propagandists, hell-cops and deniable mercenary groups, desperately clinging to power. He needs agents. And he can’t trust other devils. As it stands, most report to his scribe, Titivilus, instead of him.

But Dispater has seen deep into the mortal soul. He owns millions of them. He knows the ways they act, the things they want - and, so… better the devil you know?

Perk: Your green steel mimir, beyond containing 10 Psyche Slots, also has access to the personnel files of Hell. Almost every creature of note anywhere has a file.

Drawback: You need to fill out a report to Dispater and submit it to your mimir once a week. If you fail to do this, your MD only return to your pool on a roll of 1 until you do. Having a lie in your report discovered causes an immediate Doom.

Target creature of [dice]HD or less treats you as a friendly acquaintance for [sum] hours. If you do something a friendly acquaintance really wouldn’t - call them a severely rude name, rob them, shit on their floor - they can save to end the effect. Dealing any damage to them ends the effect automatically. Casting this on yourself cheers you up and banishes intrusive thoughts.

Send a message of [sum] words to someone you are familiar with. The words are spoken into their ear, and they may respond with [dice] words of their own.

For [sum] hours, you can communicate with rats, bats, bugs, small snakes, foxes, raccoons, jackals, pigeons, etc. You may compel from them [dice] favours. Answering a question is a favour.

You enchant an object of [dice] slots or smaller, allowing you to hear from it as though it was your ear for [sum] hours.

Target a spherical area [dice] miles in diameter which is at most [sum] miles from you.  Everything in the targeted area hears a message of [sum - 3] words spoken in a low, roaring voice, echoing as though against iron.

Inscribe a glowing symbol which, when viewed by a creature, forces them to save or be consumed by nameless terror and dread. Can terrify a total of [sum]HD of creatures, those who successfully save are not counted against the total.

You infuse a creature or object with an intense feeling of revulsion/attraction, causing all unintelligent creatures, and intelligent creatures with less than [dice]HD, to treat the target as though it were coated in poison and shit/coated in joy, friendship and delicious, delicious cocaine. This lasts for [sum] hours.

Choose a creature (or location) you have met or heard of. An invisible eyeball appears near to the target, observing it and the location they are in. It’s accompanied by an invisible ear that transmits sound to you.  Creatures unwilling to be observed may save to make the image blurry and you unable to hear through the Scry. If you have a body part from a target creature, they cannot save.

Target creature of [dice]*2 or less HD must save or be pulled to a jail cell in Dis via a roaring interplanar portal. If the creature is wanted by the Nine Hells, they are immediately imprisoned and presumably prepared for a grim fate. Otherwise, they reappear in [sum] rounds, singed and a little beaten up, but mostly unharmed.

You may transfer the contents of a Psyche Slot from one creature (of [dice]*2 HD or less) you can see to another (also of [dice]*2 HD or less). If either creature is unwilling, it may save, and one successful save prevents the spell from going through.  You can use this to give people your curses, steal peoples’ dreams, inject ideologies, move ideas from one person to another, pull out a friend’s phobia and inflict it on a foe, and so on.

Dispater’s schemes include you, finally. You’re given the task to defeat and arrest an Osyluth (Bone-Devil) of some importance, in its home District of Dis.

A (different, hopefully) Osyluth appears from a portal. It will demand an immediate explanation for something in one of your reports and how your actions assisted the Nine Hells. Failure to satisfy it results in your MD being confiscated for a month.

Dispater turns on you. You know too much. Nine kill-teams of spell-immune Bueroza (Steel Devils) have been dispatched to mangle you severely and return your head to Dispater. They are coming within the next three days.

You can avoid your Doom by achieving a seat in the City Conseil of Dis, by killing a Demon Lord, by becoming beyond reproach in Hell,  or by getting the single most paranoid living thing (Dispater) to trust you completely.