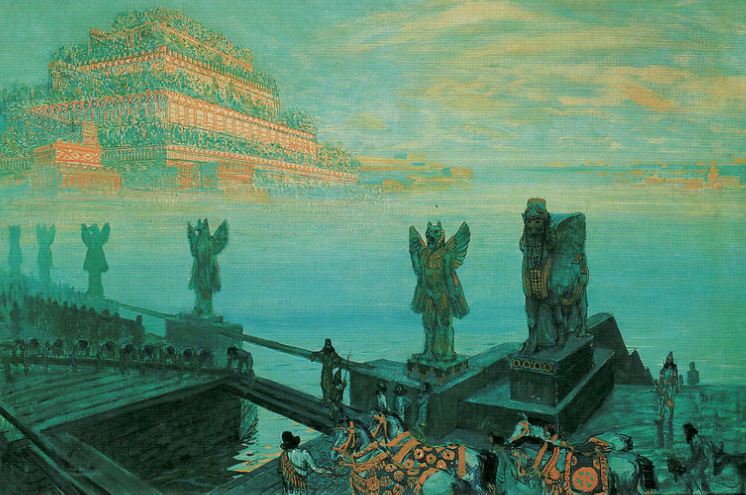 And not just because it is the only one.

This City has always been Qal Ashen - the City is God, the City is the Monarch. Her people were, in days when there were still people elsewhere, considered arrogant, brusque, brutally honest and severe. Now, no-one beside remains.

The Labouring Dead do everything in the city. Build, farm, maintain, dig. There is enough food to feed millions, in a city that has tens of thousands of residents at most. Most of it rots. Huge amounts of free time is the norm. Social divisions are along the lines of glory, important ancestors, and the location of your home, rather than who can afford food.

The City’s architecture tends towards the cyclopean, the titanic, the ominous and the brutal. Even the houses of the poor are made of many rooms. The palaces of state, and great constructions like the colosseum, almost seem built for giants.

The people are not giants in stature, but in deed, well…

Most Ashenites are human. Just as indomitable, reckless and melancholy as normal.

The northern part of Qal Ashen’s great wall runs along the seabed - about a third of the area within is water, with two massive gates which, in the First Monarch’s days, would have allowed the great treasure-galleons to set forth for distant places with names now only regarded in myth - Talea, Sanyakhun, Jagta, and the like.

Now, small and somewhat wretched vessels put forth from the disused ports to go to the Small Isles, a salt-encrusted chain of rocks half a day north of the city.

There are outlying villages here, inhabited in spring, summer and early autumn, by the people called Islanders. They return in winter, for this is habitually when the worst of the sea-monsters come. This is not to say that people are not eaten by sea-beasts in the rest of the year.

The Islanders are Ashenite, yes, but they are separated from the city for much of the year, overseeing the Labouring Dead in unenviable drudge-work, collecting necessary salt and other materials.

They form a separate social class, to an extent, with their own barely-comprehensible dialect they use to shit talk you in front of your face.

The Ayavan are the people of the Ayav-Utav, an extensive area of woods which exist inside the city wall. They live nomadically with few possessions, accompanied by a gang of the Labouring Dead. They speak a distinct dialect, one which is very old, and habitually reject footwear. They claim to live as people did before kings, cities and the onset of Old Age. Some accuse them of insufficient piety to Qal Ashen.

Humans have no particular mechanical quirks.

Ashenites of past eras, returned to the City by the power of the Argent cult.

A mobile corpse (not an unfamiliar sight for an Ashenite, by any means) but one with will, voice, and agency. They are often old-fashioned, or confused by modern traditions. Most were resurrected with a sacred duty in mind.

The method was invented by Arminius, the brother of the First Monarch. He outlived the legendary sovereign and guided the City through the chaos that ensued when their 600 year reign came to an end.

No Returned exist from the era before Arminius - which is the era of the First Monarch.

Resurrecting dead Monarchs either doesn’t work, or is forbidden. The Argents aren’t keen to discuss it.

If you play a Returned, you are undead, not living, with all the multitudinous implications thereof.

There are those in the City who have a piece of the Curse within them.

Most are Descendants of those who once worshipped the Cruel Nine, the other gods, but came to Qal Ashen in time to be saved from transfiguration. Unfortunately, the Curse is persistent, and some trace of it remains, handed down - halted from decaying the mind, but not from twisting the body.

The people of Lost Tekir form a notable subculture within the City - Tekir fell only 150 years ago, and was considered the sister-city of Qal Ashen. The Tekirans, during the violent collapse of their city, were afflicted en masse by the spreading curse. In a supreme act of willpower, many managed to maintain their minds long enough to make their way to the city - following the path laid by the famous arbiter Florus. Now, they mostly reside in Berutum Tekir, a district of the city built like a small piece of the lost and glorious homeland.

If you play a Part-Cursed, you start with two mutations, and are, well, partially Cursed.

There are only a few Lune dynasties in the city - the total number of them must be less than 300.

Lunes are towering, pallid, crowned with short horns. Their skin is cold and corpse-blue, or white like the rare snows which come to the City. Their eyes are piercing. They have translucent bones. Many boast pridefully of their grace and keenness. Many claim direct descent from Lakhmu, who founded the Celebrant Cult and came to the city from elsewhere.

They claim they are immune to the Curse. Many claim this is because of some quality they possess which mere humans lack. Others simply thank Qal Ashen for their good fortune.

According to old stories, some things in our future are decreed, made immutable by the dictates and laws of the Gods. A Lune myth says their ancestors performed some rite - or some duty, perhaps, which made them exempt - a people without destiny.

You are also immune to unwilling mutation.

There are only a few clans of Serpent-Children in the city - the total number must be less than 500.

They are stout, with dark eyes and slit-pupils, and patches of scales. This is only one of their forms, of course - they can crawl out of their own mouths, becoming a huge snake - their shed body rapidly decays to ash. When they want to return to their human shape, they simply crawl out of the mouth of the snake, and the process repeats.

In contrast to the usual Ashenite tradition of fervently tracking your relation to famous dead people, the serpent-children simply refuse to discuss their ancestors - indeed, it’s considered by them to be bad manners to discuss the dead at all.

They make no claims about immunity to the Curse, but there are no reports of any of them turning into monsters.

If you play a Serpent-Child, you are at most five and a half feet tall, immune to most poisons, and can transform into a large snake. Changing forms incurs 2 Fatigue. However, you are cold blooded - extreme cold and extreme heat inflict double Fatigue on you, and if you don’t warm yourself in the sun (or by another source of warmth) you are lethargic and slow-moving for the day.

You are also immune to unwilling mutation.

CUSTOMS OF THE CITY

Law and punishment in the City is retributive. Strike out another’s eye, and your eye will be struck out. The hands of thieves are cut off, and so are the feet of warriors who abandon the unarmed to die.

Custom: Two Ashenites may agree to battle until First Blood, until First Injury, or until Death, and, if so agreed, neither will receive punishment for the injuries they deal to the other.

Name: Host Gift
Purpose: To ensure the loyalty of one who serves you.
Custom: Invite the one whose loyalty to wish to reassure to a rich dinner, and offer them a tangible gift of some sort - a recovered treasure, an arcane secret. The gift cannot be simple coins, nor can it be something perishable or consumable. The agreed upon social convention is that you are reassuring the one who serves you of your appreciation for them. They can choose to reject the gift to break your association.

Name: Send for an Arbiter

Custom: You may halt an argument to send for an Arbiter to dispute for you. Asking for a specific Arbiter is seen as poor taste (cheating, even), so you generally get the nearest one. This can be done in response to someone offering Monomachy, in place of the duel.

Custom: It is forbidden on pain of forty lashes to eat the meat of another human, a dog, a cat, a snake, or any bird.

Purpose: To pass a few hours, and to show tactical skill.

Custom: A board game, favourite of the City. It’s a bit like senet, a bit like chess.

Said to have been played by Merodach and the First Monarch. Each player should roll 1d20, adding the higher of their Lore or their to Hit bonus - the higher result wins, draws are possible. If you spend an hour playing it with someone (earnestly), you each learn the other’s level and general level of martial skill. Shepherds win the Royal Game automatically.

Purpose: To punish egregious lawbreakers and/or protect the City.

Custom: On the word of the Monarch - and only on the word of the Monarch - a citizen of the city is stripped of their titles, stripped of their property, and made unable to command the Labouring Dead. Their choices are to remain in the city, ostracised, or to leave. This custom was over-employed by the much-reviled Seventh Monarch, and may have contributed to their suspicious demise (or assassination, if you believe the rumours).As such, the Monarch only employs it in the most extreme circumstance.

Custom: When someone is to be exiled, they instead may demand to be imprisoned beneath the colosseum in the city’s heart. Should they survive three bouts in the arena, it is deemed that Qal Ashen desires them living, and in his city, and they are released.