A mesopotamian-esque setting, where the world is consumed by a curse that infuses all living things with Too Much Life, turning them into immortal monsters. The only safe place, where uncursed people remain, is a bleak, theocratic city where the God of Death is worshipped: Qal Ashen. 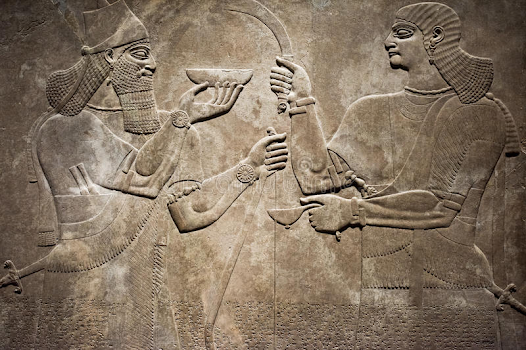 The Magus is adapted from the Magician of Vain the Sword 2e.

The Spells of both of these classes are rolled from a 1d100 List. In lieu of the intended one, the one from Vain the Sword 2e is also well written and inspiring.

Understanding is a fleeting thing. Perhaps some in the past understood the hidden mechanisms, the causes, of sorcery. Now only the results can be seen. The works and invocations of the old world have been lost beneath the herds of beasts. Now, new knowledge must be crafted, and strange new blasphemies explored.

Few in the City will speak ill of Magi.

+1 Cantrip and +1 Language per Template.

Each level, choose to learn one of the following magical tricks:

When you cast a spell you know, you now have the skill to do so backwards, resulting in the opposite effect, such as a darkness spell creating light, or a spell which heals wounds causing them.

By eye-contact, you can tell if someone has MD, how many MD they have, and what Spells or Incantations they know.

The Great Wall is a mighty defence, but it is not infallible. Some monsters can climb, some can fly - most fearfully, some can dig tunnels. Only one in history was great enough to breach the Wall itself. To say little of the threats within the wall. Poisoners, scoundrels, thieves, traitors, and the overly ambitious.

Fortunately, the City has a second wall. A wall of swords. The order of Vigilants, the bannerless army, the tomb-guardians, patrollers in the dark, and the defenders of the meek.

You are a member of the Order of Vigilants. As you are a ruler, this is probably known to at least the people you rule - however, most other Vigilants are anonymous. Secrecy helps with their duties. There are Vigilants in every district, and at every level of Ashenite society. Surely, from the depths of Amaru’s Gullet to the halls of the Palace, there is vigilance.

You know a number of secret signs by which you can covertly identify fellow Vigilants.

Other vigilants will usually side with you in a fight. You are obligated to be ready to spring to the defence of Qal Ashen at a moment’s notice.

You know of a secret Vigilant meeting place within your district, where you can take refuge if needs must.

You may enter a state of heightened senses for an hour.

While in this state, you always act first in initiative (ties between Vigilants resolved by whichever has the higher templates).

You also have smell keen enough to track with, hearing so precise as to hear a bare footstep, sight which can see heat as an eighth colour, taste which can discern even tasteless poison, and can read carvings by touch.

You cannot use this again until you do one of: sleep, meditate for two hours or land a critical hit.

You may, upon successfully hitting someone with an attack, immediately apply the effect of a spell you know on them, rolling MD as normal.

If this makes no sense, choose a reasonable negative effect which is themed around the spell - for example, Spider Climb forcefully sticking you to surfaces, or Moonview effectively blinding the target by moving their viewpoint to the Moon.

While in Focus, you are immune to magic, unless you wish otherwise.