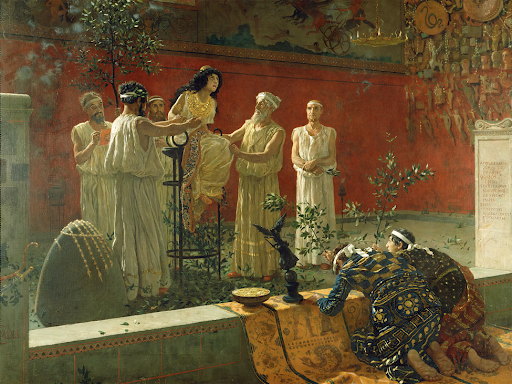 The people of the Heptapolis seem to insist that FATE is a goddess, daughter of the Titan called Order. It is one of the many things that makes the learned in further parts of the world shake their heads and chuckle.

Calling FATE a goddess is an insult. They are greater than that.

The creation of the world was precipitated by the death of ALL, whose body became Blood, Horizon, Ocean, Earth, Order and Void, the six Titans.

Was ALL’s death from Illness? Age? Suicide? No.

FATE, adamant-clad, weaves the threads of history. They decide all that will happen. Their will overrides that of Titans, Gods and Mortals alike. Sometimes, to shape things more precisely, FATE will bestow a mortal with the power of Prophecy.

You are one such Mortal.

+1 AC or Save and +1 Prophecy Dice per Template.

You speak aloud a statement [sum] Words long. It will eventually come to pass.

Two Caveats:  One - you don’t control the time-frame, and you can’t say when the thing will happen. Two - You cannot make a Prophecy about yourself. You are the cosmic mouthpiece, not the primary figure of the tale.

“You Will Die” is a completely meaningless Prophecy - everyone who your powers can affect will die in time. (Gods and Titans have the ‘privilege’ of getting their tribulations and destines straight from FATE).

“You Will Die, due to Bees” carries a bit more punch, eh?

In purely mechanical terms, if a result of a roll would fulfil one of your prophecies, that result happens, no roll needed.

Be aware that prophecies are sometimes true in roundabout ways - bees chasing the victim of your Prophecy into a Drakon’s lair, say, rather than stinging them to death.

I recommend writing down your prophecies so you can cryptically reference them as soon as anyone does anything.

If you roll doubles when pronouncing a Prophecy, there is a contradiction with the words of Another Oracle, somewhere in the Kosmos.

Changes from Knots ignore the word limit of the original prophecy.
If the prophecy is essentially the same after the Knot is resolved, you haven't fixed the conflict - so immediately roll two more Knots.
Keep track of the original prophecy. You can restore it to the intended meaning by tracking down the Oracle that fucked your Prophecy up, and defeating them in a contest of wits or weapons.

FATE allows you to pull the strands every so often, as a reward.

You can add [sum] to any roll you are present for - i.e., seeing the action which the roll represents.

And now, tangle those fools in the very same strands - tying round ankles and necks.

You can now subtract [sum] from any roll you are present for.

The twitching of the strands gives you a preternatural sixth sense.

You cannot be surprised, snuck up on, or ambushed.

You may expend a Prophecy Dice to ask the person running the game - “What happens if I [x]?” and receive an honest, if possibly cryptic, answer.

You move through the tangled strands like a spider across its web. There is only one greater than you in this Domain.

You can expend a Prophecy Dice to retcon actions into the game.

I.e., the DM says, “well Aristomache, you’re unarmed, so-” and you smugly shake your head and say, well, actually…

You cannot do this with the actions of others - only things you yourself could have reasonably accomplished.